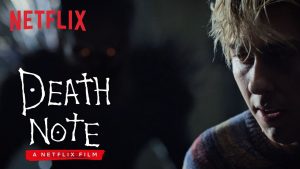 Warner Brother’s adaptation of a Japanese manga, Death Note, follows more closely along to its source material than I expected. They keep all the awkward names and it’s littered with references left and right. At the same time, the 2017 adaptation comes off as inconsistent in various ways, such as the characters or settings. Of course, I understand it’s under the less than ideal circumstances where Netflix is cramming an entire series into a movie, so it’s hard to be too critical.

Keeping all this in mind, there is plenty about this movie that I like, but I feel there are some parts that missed the target.

The Light in the Dark

Natt Wolf (Light / Kira) plays the part of an angst filled teen almost too well. Lakeith who plays L acts just like the character in the anime. I didn’t know if I liked him in the role at first, but he proved me wrong. The voice acting for Ryuk was creepy and mischievous as it should be. Willem Dafoe did an excellent job at portraying the Death God.  The CG crew also did a fantastic job at animating Ryuk. He was often masked in the shadows which I appreciated because it felt more realistic. In fact, I actually thought the monster was a really detailed practical effect at first.

Even though Margaret Qualley is a believably moody out-of-place cheerleader, she ultimately doesn’t sell me on her relationship with Light. Mia is an unpredictable character that has inconsistent qualities in her personality. Because of this, I don’t really feel a high school love vibe from them. I do understand many changes needed to be made for the sake of condensing so much content. However, it does show some faults in the story. I’ll cover that later when I go over what things they changed in the adaptation.

Much of what hurt this movie was the underwhelming changes to the story. These changes were essential to condensing from a full length series to a movie, but probably seemed to not have been given much thought. The movie starts off very confused as to its identity and audience. It starts off thinking that its target audience is misguided teenagers, but then it starts showing a bunch of gore.

I guess if they’re targeting 17-19 year old they’d really hit their mark. However I think the movie would have benefited a lot from ditching all the stereotypical high school movie elements. Those parts were detrimental; they watered down the story and made the movie drag. The characters’ emotions were all over the place, it was unrealistic. That’s why I wasn’t sold on the actual relationships between the characters.

I had the impression that this movie would be an Americanized version of the anime. However, other than some elements at the beginning and end, the movie follows very closely along to the original. In particular, L’s character was portrayed exactly like the anime character.

At first, I was unsure if portraying L that way was unwise because his presence would feel too animated in a live action setting. That would have been especially problematic with this movie being set in a much darker and less comedic atmosphere. Fortunately, I was pleasantly convinced otherwise by Stanfield’s performance. I’m glad they kept his character the same, and that impression also impacted my opinions of the changes for the other characters.

What I expected to get was a more realistic version of the concept of Death Note. What I got was the other way around.

Light’s character changes from anime to movie, which I was open minded about. However, I didn’t think his new role really fit the description of someone who would use the Death Note without feeling the least bit of guilt.

In the anime, Light is a self absorbed character. He acts this way because he gets perfect grades and is a star athlete in school. The original character has sociopaths tendencies, yet the American Light does homework for other kids and gets beat up by bullies. It’s hard to believe such soft character could turn cold-hearted so quickly, showing little to no resistance to Ryuk. If they changed Light’s actions in the American Version, I might have liked it a little better. In this respect, changing the character without changing the actions makes the pacing a bit awkward for me.

I feel the same way about the story line as I do about the characters. They keep many things the similar, but at the same time change just as many story aspects. It is as if they were too lazy to start from scratch and plot reference points. Instead, they just changed things for the sake of condensing all of the rich content of the anime to under two hours. I realize that I am being critical and it is a ton of content to push into two hours, but I was hoping for a bit more originality. In addition, because of this the quick pacing, the movie feels totally off as well.

The easiest way to sum up the movie’s performance is that everything is just slightly off.

And On That Note…

They turned a compelling story into a cheesy High School Homecoming (TM) movie with a slightly gory and dark theme. This movie couldn’t decide what genre it wanted to be. The story is inconsistent in what it wants to be about. I would consider it to be more of a remake than a retelling, which would have been a more interesting and less predictable choice. Overall, Death Note (2017)  was cool to watch as a fan, but it leaves me feeling that this was a missed opportunity. I had high hopes that maybe they would have come to the realization that these things don’t usually translate well, but alas history repeats itself.

*Sorry for the terrible headers. I’m kinda over this article. Kthxbye.

Source: Lionsgate Some franchises transcend both their genres and the first medium their stories appear in. They become a part of the...

SPOILERS AHEAD! Major plot points and twists discussed in this review. That's some foreshadowing. Avengers: Endgame is pretty much the...

Note: Spoilers ahoy in this Spiderman: Into the Spider-Verse review. I've just watched one of the most refreshing, vibrant takes on...

Well, let's get it on with then. About halfway through The Titan, I paused the movie and thought to myself, "why did I decide to watch...