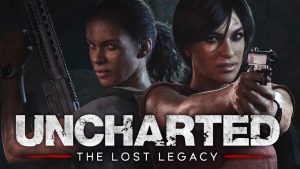 A Legacy Not Lost

Think about it: what says treasure hunting more than running around on a map looking for giant X’s? We’ll see how well it works in this Uncharted: The Lost Legacy review and if it is worthy of refreshing the franchise.

Spoiler: the claim that The Lost Legacy is an open world game is maybe half true.

From Linear to Non-Linear

The Lost Legacy starts off as a typical Uncharted game. Typically we get a preface to the entire story that leaves you with many questions to ask. What are they looking for? Why are these two characters working together? Where are they going and what’s going to happen next?

We get an ominous atmosphere and opportunity for character setup. It’s been a while since we have seen Chloe in action.  She makes the perfect character to spin off because she’s just as much of a smart-ass as Nathan is.  I expected this kind of narrative and enjoyed it just the same. The intro stays true to the series and lacks the open world mechanic, helping to transition the gameplay.

I was excited to see how they decided to open the franchise to a more non-linear narrative. However, once I was thrown into the open world map, I realized that it isn’t something that the main tetralogy needed. What makes Uncharted great is that it is so masterfully crafted to give the audience an incredibly cinematic feel. The problem with this open world concept is that it takes away from the momentum, the tension, that builds from specific scenarios pushing you towards a goal. The difficulty lies in balancing this cinematic feel while also giving the player much more freedom.

I found it necessary to refer back to the map literally every ten seconds.

The new overworld map is absolutely gorgeous. It is littered with lakes, mountains, cliffs, waterfalls, jungles, ruins, etc. However, it does get a bit difficult to navigate around this map due to the crazy diversity of terrain. I often found it difficult to gauge how far I traveled and which direction I was facing. I found it necessary to refer back to the map literally every ten seconds.

At first glance the map looks huge! However, I’m pretty sure you can get from one side of the map to the other in about a minute by car. Oftentimes I found that I had actually missed my intended mark on the map and had driven past it a substantial distance. An on screen mini map might have taken away from the awe of this beautiful world, but it would have been nice to have the option. I can see why they never needed a mini map in past games, but I think it’s pretty necessary when you’re travelling around freely in unrestricted terrain.

Essentially, the new map makes the exciting formula of Uncharted treasure hunting feel a bit more tedious than it really should be.

Don’t be surprised if you’re feeling like you’re running all over and backtracking to collect of bunch of tokens and treasures. Backtracking is typically the nature of free roaming maps. Granted, this part is still tons of fun and filled with stakeouts, gunfights and puzzles but it’s missing an element of danger and suspense. I never found myself wondering “what’s behind this corner?” It substantially lacks the element of curiosity and exploration compared to the rest of the game. Instead, I feel like I’m just wandering around casually and finding random events and sites.

I never found myself wondering “what’s behind this corner?”

Thankfully, after you finish this part of the game it abandons the free roaming map idea and goes back to the traditional cinematic game play. This style remains gorgeously linear but masterfully structured and makes you really feel absorbed in the story.

The rest of the game progresses exactly how it should. We get more sneaking, gun-slinging, and puzzle solving. Lost Legacy takes it back to its solid core gameplay. The story has no dragging; just engrossing action. I commend the Naughty Dog team for trying something new, but I’m also glad they didn’t commit to making the entire game in that fashion.

The puzzles are fun and rewarding, but not too challenging. I doubt most people will have to spend more than ten minutes figuring out most of the puzzles. What makes up for that, however, is that they come in abundance. There are plenty of puzzles to keep you busy, but don’t expect to bust your brain on any of them.

To be fair, I had been itching to play an over the shoulder shooter for awhile. So I might be a bit biased in saying that the gunfights were on par with many of the gunfights in the main series: classic gunning your way through underground catacombs and jumping off high speed vehicles while pursuing a locomotive with a bomb set to explode. Ya’know, the usual.

One disappointment is that compared to the main series the story line that unfolds is a little lackluster. Clearly I didn’t expect the same depth and complexity, but it certainly is missed. Regardless of my lowered expectations, I still couldn’t help but miss the story level of the main series. It’s one of those things where you don’t realize what is there until it’s gone. We still get plot twists and conflicts, but it’s a bit more straightforward this time around.

It’s pretty clear to me that The Lost Legacy was not as polished as the other games released in recent years. I’ve run into a couple of bugs and glitches playing the game, but nothing that I wasn’t willing to excuse for the amount of fun I’ve had playing this game. I’ve played through the main story twice now and it feels just as fresh playing through the second time as it did the first. Although the game feels like it’s half the length of a normal Uncharted game, it was still very much enjoyed.

Sure, there are a couple gripes to be had, but it retails at a price that’s $20 cheaper than normal games. It’s not a bad deal for a game that they pumped out in a year. The developers deserve a little slack after finishing the last chapter in Nathan’s journals. An added bonus is that you can play the incredible multiplayer modes with this version of the game. This multiplayer is the exact same one in Uncharted 4. So if you’re a fan of the series or you’re just in the mood to sneak kill and head shot while finding treasures this game is for you.