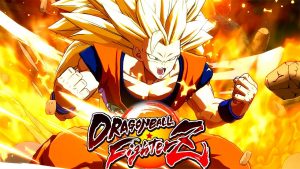 It’s exhilarating being in the ring. There is a certain kind of adrenaline rush you get when it all comes down to one-on-one competition. Everything counts: the first hit, the counters, getting in their head. When you fail you only have yourself to blame. No team members who can become your scape goat. But what if you win? When you win it’s sweet victory in its purest form. It taste like egotism, blood and savagery. There isn’t anything quite like the feeling of domination and proving superiority. It’s an instinctual primal surge of dopamine kind of feeling. Like a drug, we thirst for blood and become insatiable after a winning streak. Sometimes I feel myself unable to step away until I win. That’s why the first rule of Fight Club is “Don’t talk about Fight Club”.

A quick background of my fight history would tell you I’m definitely not the greatest. In comparison to many you might actually say that I’m trash. I have been fighting since High School. The thing about fighting is that you’ll never get good at fighting unless you get your ass kicked… a lot. So my friends and I mashed buttons not fists. Other than playing SFII: Turbo and mashing out fireballs, I really learned how to fight playing CVS2. I learned about cross-ups, being safe, footsies, hit confirms, cancels; you know the basics. If you don’t know there are plenty of places for you to learn online. It was a great time to be in the Fighting Game Community (FGC). CVS2 and MVC2 were common favorites among players. These games uprooted the potential of many pioneer fighters. These pioneers made the impossible possible with execution and timing.

Why Fighting Games are Hard

The skill gap between newbies and veterans really isolated many gamers from the FGC. Learning the basics early on enough included me in this fight club. However, someone who never learned the basics would never have the slightest chance against a seasoned player simply because they were never taught. The FGC was quite the niche audience so sales dipped. In a response many of these companies dumbed down their games which in turn hurt the quality of fighting games. Disappointing their loyal fan-base the FGC has been up and down in recent years.

There have been many games to try to close the gap between the casual and the hardcore. Some have come close and many have failed. One example is Fantasy Strike, a game we previewed in the past. Dragonball FighterZ is the game that does the best job at bringing these two groups of gamers together. It is the perfect fighting game for the casual player who wants to venture into a more competitive setting. Dragonball FighterZ is the game that DBZ Fans, the FGC, and all gamers want and deserve. DBFZ combines a fast paced flashy action fighting game that is eye catching and incredibly true to its source material. Not only that it includes interesting mechanics that are newcomer friendly and is an all around a damn good time that satiates my blood thirst. 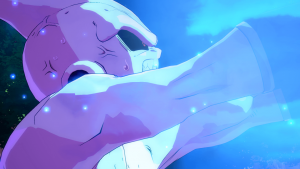 First off, DBZF looks amazing. Watching matches is enough to make your jaw drop. Two players going at it looks just like the anime. With all these super crazy combos and destructive finishes make it hard to look away. The art style is so spot on that I couldn’t tell the difference in a screenshot sometimes. It’s hard to tell if they’re hand drawn to rendered models. I don’t know how this game could look any better.

Dragonball FighterZ is also full of fan service. It comes in the form of Easter eggs that require specific fighters and conditions. If there was a specific scene in the anime that was reflected in your in game match you get special finisher animations. For example you can get the iconic Yamcha being killed by a Saibaman. These are a blast to watch. When certain characters are teamed up or up against another we get extra dialogue and voice acting. Everything down to Goku’s standard punches and kicks were taken straight out of manga panels. The team really had a special passion in creating this game. 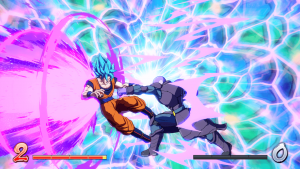 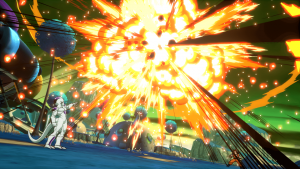 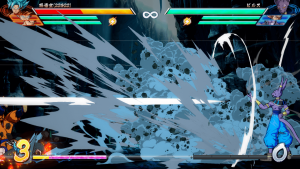 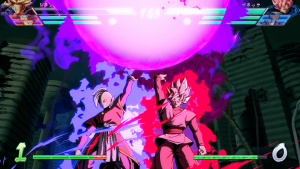 You can literally press the same button over and over to preform a super ending 30+ hit combo that destroys half the planet. Its bad-ass. Obviously newbies still need to learn basics but it’s a lighter load now. You can focus on fundamentals rather than having your mind cluttered with long complicated execution heavy combos. Manually inputting the combo offers a damage boost and thanks to damage scaling “auto-combos” doesn’t make an incredible difference in casual play. Competition is a different story. You better believe every move makes a difference. The learning curve isn’t too steep but the skill cap is high. That’s how you get such a wide spectrum of skilled players all playing the same game. 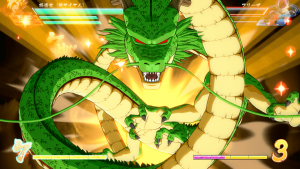 Another great thing about DBFZ is that it is controller friendly. At a tournament, you’ll see arcade sticks left and right. This is widely known to be the one true way to play fighting games. Many players take pride in their “fight sticks”. It can be intimidating and off putting not to have your own. Dragonball FighterZ is not the first controller friendly fighting game but it definitely doesn’t hurt you for it. Fight Sticks aren’t cheap, easily go for $300. So it would be rational for a newcomer to but deterred from buying a fighting game that suggested spending a couple extra hundos. So it’s a relief that the default controls for this game are set to a standard controller. However it would be nice to include a legacy stick patch so I can use my PS3 stick to play this game. 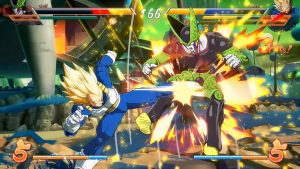 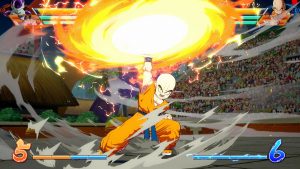 Dragonball FighterZ is not without flaws, unfortunately. The best part about DBFZ is being in an intense Ki-blasting, world destroying battle. The worst part is everything that doesn’t involve throwing kamehamehas. Every second spend in matchmaking or in a lobby is basically a form of torture. From the menu screen to the online matchmaking needs a complete redesign.

The first thing you see on screen is a loading screen. After loading is a cut-scene that you will have to skip immediately after seeing it once max. Skip the cut scene players are graciously welcomed with another loading screen. Once everything is loaded expect to scroll through a hundred servers that so that you can be surprised by another loading screen! If that isn’t painful enough it can take 5 to 10 minutes to get a match sometimes. Also you can expecting online lag which is playable but not ideal. 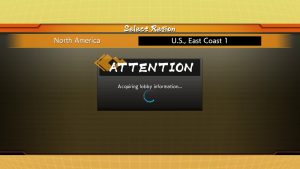 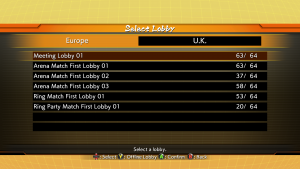 The game mode selection screen is a literal lobby map that you have to walk an avatar to. Players can warp to these locations by holding L2 but this should be the default mode selection screen. Player profile and customization is mapped to a separate button and not on the menu screen like you would expect. Keeping the online game modes and the offline game modes separate like every other fighting game would decrease the need to sit through a bunch of loading screens. Nobody even interacts in the lobby. Instead it’s a bunch of people standing still trying to get matches. 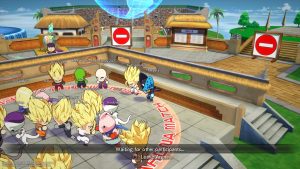 The most unpolished part of this game is the story mode, hands down. I probably wouldn’t have ever touched this if I didn’t need to complete it to unlock Android 21. The story mode was clearly something they were required to include and they just threw it in last minute. Every cutscene is a waste of time. Someone is unconscious and we have to fight clones. After, Bulma explains some soul linking nonsense to the newly conscious fighter. After hearing it over and over I still have no idea what is going on in this story. They clearly thought too much about how to make sense of the various fighters teaming up. Honestly, I think this game would be greatly improved by just trashing story mode altogether.

Dragonball story arcs usually just include a “strongest villain ever” followed by training and getting their asses kicked. After that Goku comes fashionably late and wins by Spirit Bomb. They should have just done that again.

Luckily the focus of the development of this game was on the core gameplay. I’d gladly sit through these loading screens and deal with terrible UI to get into a match but I wish I didn’t. If you and a friend really got into DBFZ you could be looking at potentially unlimited hours of replay value. That’s what this game was designed around: solid damn good fun gameplay. What Sets Dragonball FighterZ from the other fighting games is that it bridges the skill gap between the new and the old. It takes the accessibility of a game similar to Smash Bros where many of the basics carry through to other characters. If you can play one character you can get by with another. Taking this element of the game and adding many Arc Systems mechanics that are newcomer friendly is done seamlessly.

This game will bring players together. Plus, it’s a mutha-fuckin’ Dragonball Z game! Who plays video games and hasn’t watched DBZ in this generation?! DBFZ needs a patch but still plays great while we wait. Players are constantly in the lab (training mode) developing new tech and still making the impossible possible. It will be a treat to see what players will surprise us with in a clutch grand finals match at the world championships. That’s when the crowd will get hype and that’s the spirit of the FGC. 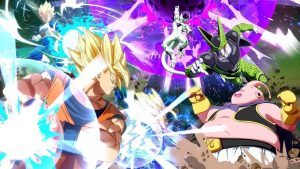 An SF Bay Area native, perfect imperfectionist, and everyday legend. Photographer extraordinaire, master of analysis on the gaming scene, and creative professional. Sketching on the daily, traveling on the regular.