DESTROY THE COMICS > Games > Celeste Review: Persistence at its Peak on Switch
14 FEB 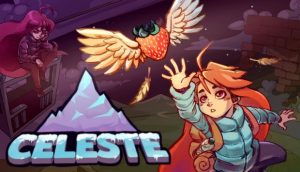 A Wild Climb Up Mt. Celeste

Have you ever lived a moment in your life where you had to overcome some sort of obstacle through dedication and perseverance? Perhaps an event where you had failed over and over again to the point of self-doubt yet only to stay persistent until you succeeded? Do you remember the feeling after? There is this rush of relief with a burning sense of accomplishment. That’s how I felt when I reached to top of Mt. Celeste.

You can do anything that you set your mind to. That’s the lesson we learn from Celeste, from Matt Thorson’s company Matt Makes Games, check out the game’s page here. I was presented with a challenging climb that I knew I could complete with persistence. Matt Makes Games is also the same company that brought us Towerfall: Ascension. Both games have similar art styles and game mechanics. What you’ll get from Celeste is an amazing experience from an indie masterpiece. Not only does Celeste offer sharp game play and a charming aesthetic; Celeste takes that to the next level making this game a work of art. 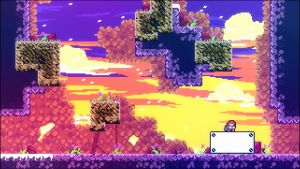 At its core, Celeste is a simple platformer with precision tight controls and creative level design. That in itself is enough to constitute a great game. The controls are so responsive that when I fall into a pit of spikes I recognize that as my own fault and no one else’s. Yet the controls feel so good that as an experienced platformer player missteps were the least of my worries.

I played this game on the Nintendo Switch in handheld as well as docked. In docked mode I agree that the Pro Controller felt much more comfortable than hitting the directional buttons on the Joy Con. The Joy Con analog stick feels awkward for a 2D Platformer and the D Pad is just slightly awkward when you want to air dash in a diagonal line.

What I actually found to be the best controller is the 8Bitdo SN30 Pro Bluetooth Gamepad. It’s around 50 bucks last time we checked.

Basically it’s a Super Nintendo Controller for your switch. The game controls perfectly if you’re rockin’ one of these babies. 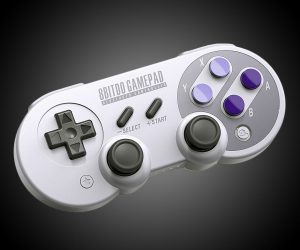 The true challenge lies within the level design. Each screen is a puzzle on how you get from point A to point B. Each level introduces something new in the environment that helps Madeline (main protagonist) navigate around all the death traps of Mt. Celeste. The best part is that the game mechanics are super simple. Madeline gets one jump and one mid-air dash. Other than the fact that she can climb walls, that’s all there is to it. It is not a game that is hard to learn. Simply put: Celeste just feels so good to play. 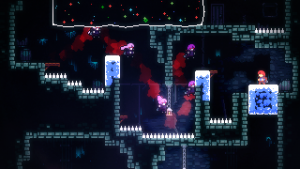 Not only does Celeste feel good but it also looks and sounds good too. With retro pixel art becoming more and more common in video games, Celeste still stands out. Amora Bettany and Pedro Medeiros really know how to take a pixel sprite and combine minimalism and cuteness into a single aesthetic.

Each sprite is full of character and color. Celeste has a clean 16 bit art style that resembles Towerfall: Ascension. To me, the pixel backgrounds really captivated me in some type of way. There were situations were everything seemed so vast and baron while some levels had me feeling claustrophobic. Referencing some ancient ruins on the side of Mt. Celeste or caught up among all the clutter in the haunted hotel. Across all the levels on Mt. Celeste, it retained its mysterious and enchanting atmosphere the entire climb. 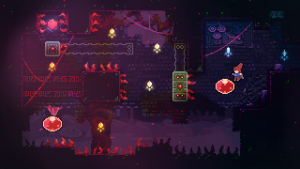 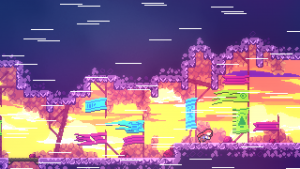 Part of that is to thank to the background music and sounds. Thanks to Lena Raine I’ve felt motivated, inspired and committed to reaching the peak of Mt. Celeste. The game is filled with mystical tones and eerie doorbell sounds and everything works well together. The sounds and music in Celeste also go with the pixel animations and illustration stills with graceful piano and eerie cold winds. I want to particularly mention watching Mr. Oshirio re-materialize as a ghost when you ring the reception bell. It was an animation amazing to watch and I didn’t want that to go unmentioned.

And The Cherry on Top

What pushes Celeste over the threshold from a great game to a masterpiece is the personality that was put into this game. For a game to be visually stunning and solid game play is typically all we ask from a great game. I believe there was a lot of heart behind this game as it holds an endearing narrative about a young girl climbing to a single goal.

The player and Madeline share the same common goal of reaching the summit but have different obstacles. For the player it’s the mental problem solving obstacle combined with a test of one’s hand-eye coordination. For Madeline it’s the obstacle of self-doubt and mental health. Madeline’s story is of her coming to terms with her insecurities and overcome self loathing. In this way I believe many people can relate to Madeline in the way that I did. All I can say about the ending is that it tickled my heart. That’s what sets Celeste apart from other indie games. 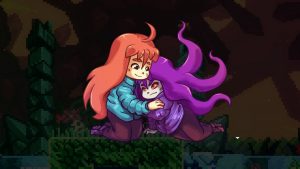 A Work of Art

Personally I was impressed by the pacing of the difficulty of the game. Even though you never really get new powers or abilities each level does an excellent job adjusting in difficulty as you get closer to the top. The beginning made me feel confident and sucked me in and by the time I knew it I was a mere 30 screens from the top after about a thousand deaths. Games like Super Meat Boy and I Wanna Be the Guy, which are so difficult I felt like reaching the end was impossible. So to this day I still haven’t beat all of Super Meat Boy. Celeste is the perfect difficulty and by the end of the several hour journey even a rookie platformer should be able to complete this mountain climb. That’s a whole journey on its own!

Even if you have the smallest interest in Celeste, I would recommend it to you. Don’t worry if you think it’ll be too difficult; Celeste is a game that is here to take care of you. The game encourages you to keep trying with split second respawns and many checkpoints. There are plenty of extra challenges like collecting strawberries or B-Side cassette tapes that unlock alternate levels that are fucking hard, Man. With that being said, I still have much to do in the game which gives Celeste many more hours of replay value. The main game is challenging but not impossible. In fact I felt that the main game was a bit short. Maybe it was just such a good game that it left me wanting more, and that’s the biggest complaint I actually have with this game. I would have loved to meet more crazy characters and different environments with different stage mechanics. 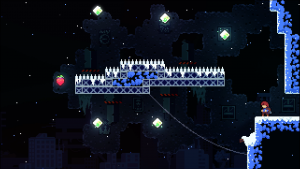 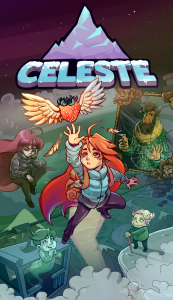 1 thought on “Celeste Review: Persistence at its Peak on Switch”